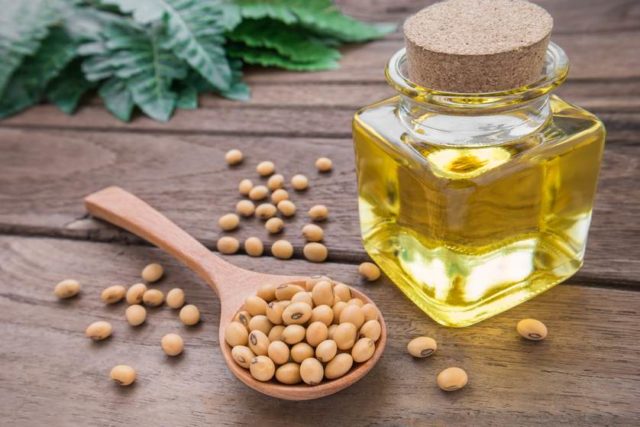 To produce soybean oil, the soybeans are cracked, adjusted for moisture content, heated to between 60 and 88 °C (140–190 °F), rolled into flakes, and solvent-extracted with hexanes. The oil is then refined, blended for different applications, and sometimes hydrogenated. Soybean oils, both liquid and partially hydrogenated are sold as “vegetable oil,” or are ingredients in a wide variety of processed foods. Most of the remaining residue (soybean meal) is used as animal feed.

In the 2002–2003 growing season, 30.6 million tons of soybean oil were produced worldwide, constituting about half of worldwide edible vegetable oil production, and thirty percent of all fats and oils produced, including animal fats and oils derived from tropical plants.
Composition

The high-proportion of oxidation-prone linolenic acid is undesirable for some uses, such as cooking oils. Three companies, Monsanto Company, DuPont/Bunge, and Asoyia in 2004 introduced low linolenic Roundup Ready soybeans. Hydrogenation may be used to reduce the unsaturation in linolenic acid. The resulting oil is called hydrogenated soybean oil. If the hydrogenation is only partially complete, the oil may contain small amounts of trans fat.
Health concerns